Well, another year has passed since my last check in here. Apologies to those who check in here regularly looking for silly statements of fact and or fiction.

I don't know why I let so much time go by between postings, I do really enjoy emptying my brain pan out and sharing with strangers, acquaintances and friends.

Originally, this page was to celebrate a special day on the calendar.  Today is December 3rd and I was reminded that Carol Burnett is having a 50th anniversary special on tonight. I can't believe that it has been so long since my family began watching this grand woman make us laugh. Good luck on the showing tonight, Carol. No worries, it can't be bad!!!!

Hope everyone watches tonight (or tomorrow, if you DVR) and enjoys.

If you like, Comment below with your favorite skit, character. or laugh. I would love to read it!

Posted by HandMeDowns...The Original Recycling Program at 4:17 PM No comments: Links to this post

Had a nice drive to take my nephew to an orthodontist appointment. 45 minutes there, 45 minutes back. The appointment was a noon, so after we stopped at a Sonic to pick up some food.  Chicken for Nicholas and Mom and a burger for me.


The gal came to deliver the food. We traded a box, a bag and the cups for cash.

Then, suddenly, out of the blue, to the shock of all in the car...I know, I think I am going a bit overboard but it was CRAZY.  She looks at Mom and says.

WOW! What? Who Me? Mom was flabbergasted. She went on to say basically the same sentiment for a few more minutes, and Mom finally stopped protesting and accepted the compliment.

Those three words made Mom feel good. They made her feel beautiful. Made her feel noticed.

That girl does not know my mother, nor me. I don't think that she does that to everyone she delivers lunch to. Where ever you are Sonic Server, Thanks. Here's to you. You are Beautiful. You are celebrated today!
Patti

BONUS CELEBRATE: Actually, not for me...Although Had I known that it was National Frappe Day, we would have gotten Blasts, or shakes or something similar!

Today I celebrate my old friend Grace.  She started a blog here and helped me realize that I really missed writing something almost every day. I have lost my followers here and hope maybe I can get all four of them back again...maybe a few more to boot.

Grace and I met when we were in elementary school...Marumsco Hills. She was a grade below me she mostly hung out with my sister, Debi, and I was friends with her sister, Kristina. It is funny how time and distance change things. 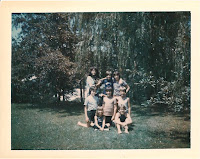 In the early 1970s the kids in our neighborhood were nearly inseparable. Skating, Biking, Red Light-Green-Light, Red Rover, cookies (thanks, Mom). Back then we used to walk to school, well, at least until we moved up to the middle school and then, at least for Kristina and I, the High School. (Man, did that terrify me!!!)

Anyway, thanks Grace for starting a blog and as soon as I figure out how to follow your blog I will!

PS...Didn't know it until I finished this post that today is

National Good Neighbor Day....
I think I am a fair current neighbor and let's ask Grace what kind of past neighbor I was.   ;)
Posted by HandMeDowns...The Original Recycling Program at 9:13 PM 1 comment: Links to this post

Today I am celebrating a beautiful warm spring day spent with lovely family members.  Hours of Scrabble on the back deck with Mom and a luscious dinner at a local restaurant with Mom and Sister. A good steak, Mac and Cheese and green beans with a follow up of Deep Chocolate Brownie and homemade vanilla ice cream.  That's all I have to say....Celebrate Today with ME!
Posted by HandMeDowns...The Original Recycling Program at 9:10 PM No comments: Links to this post

I went through all of my research material and decided to leave them behind and not celebrate the Carpathia saving so many people who survived the sinking of the Titanic. Or, I could have focused on any one of the scores of 'famous' people who were born or died on this day including Leonardo Di Vinci (Mona Lisa, etc); Elizabeth Montgomery (Bewitched); and Roy Clark (Thank God and Greyhound She's Gone). But I have decided to celebrate the end of worrying about Filling out those DREADFUL federal forms known as 1040s.

Many people fill out their forms in February, shortly after receiving their W2s, 1099s and other forms that summarize their previous year's income. I usually like to do mine the first part of March. This year I waited until the beginning of April because of many extracurricular influences, real or imaginary.

It took me a little over 3 hours to fill out the form using a computer program. I can't tell you how long it took me prior to sitting down at the keyboard to gather all the paperwork required to answer the questions. I don't know if that is high or low for filers similar to me, but I don't feel too badly about the time. I know that once I hit the file button I felt relief that it was over.

Monday, I went online to "find out where your return is", and discovered that it hadn't filed. OH NO. I opened my program and discovered that it had not been e-filed. I quickly hit the red button and filed. I am so glad I checked before the deadline. But talk about a stomach turn! Shortly after pressing that submit button, I received an email confirming my submission and the next day, an email notifying me that my form was accepted.

So, today, I celebrate not worrying about filling out another IRS 1040 for at least 9 months. Hope you can celebrate with me.
Posted by HandMeDowns...The Original Recycling Program at 12:01 AM No comments: Links to this post

45 years ago today three American astronauts became the center of the world almost 200 miles from home.

Many people experienced this first hand and even more watched the movie starring Tom Hanks, Kevin Bacon, Bill Paxton as the ill-fated astronauts.  If you have not seen the movie, I highly recommend it. And if you have no idea of the story, stop reading now and watch the movie or read your favorite history book.


Approximately 3 days, 15 hours later the crew splashed down in the Pacific Ocean where they were picked up by the USS Iwo Jima after 45 minutes of floating. The three men in good spirits and mostly good health.

I ask that we Celebrate Today


1-the adventurous spirits of humans who wish to explore unknowns;
2-the courage of those who work through seemingly unbeatable problems;
3-the quick-to-celebrate nature we have when finally fear and anxiety have passed.


Celebrate Today. Celebrate Everyday.
Posted by HandMeDowns...The Original Recycling Program at 12:01 AM No comments: Links to this post

Followers-Become a follower today and get a free limerick about YOU!